History and CDS Major at the University of Mary Washington

No Widgets found in the Sidebar Alt!

As someone who doesn’t use social media that often, this assignment has been an adventure. However, out of all the social media platforms we could have picked, I’m glad Twitter was the one we chose to replicate. I say this because Twitter is the only social media platform I’m active on a semi-frequent basis, and even then I tend to abide by a strict “look-don’t-post” rule. Lately I’ve been easing up on that, and this assignment let me practice my Twitter skills in a historical environment. I typically find posting every minute of one’s life online to be odd, but using it for a historical project such as this has been fun!

The historical event I chose to focus on was the 1969 NASA Moon Landing. I knew this was a monumental moment in history, which was why I wanted to dig up some more obscure figures and facts that you don’t typically hear about. We were given free reign to choose the perspective of the individual we could represent in this assignment, which could have been anything from an actual historical figure to an anthropomorphized object. As fun as if would have been to try and Tweet things from the perspective of the lunar module, I decided to focus on an actual astronaut. Something that always fascinated me about the moon landing if that you always hear about Neil Armstrong and Edwin “Buzz” Aldrin, but never really anything about the others involved in the Apollo 11 mission other than the collective entity that is the National Aeronautic and Space Administration (NASA). One person I discovered that I had never heard of was command module pilot Michael Collins. Collins was on that same mission with Armstrong and Aldrin. In fact, he outranked Aldrin! The reason Collins seems to have been lost to history is simply because he didn’t travel to the moon with the other two. Yet, had Collins not been a part of this mission, Armstrong and Aldrin might not have made it safely back to Earth. You see, Collins was in charge of piloting the command module Columbia around the dark side of the moon, staying in orbit, so Armstrong and Aldrin could redock the Eagle lunar module with the Columbia to return home. Out of the three astronauts who went on the Apollo 11 mission, Collins is most often forgotten.

It’s important to note that Apollo 11 wasn’t Collins first space flight. Collins had previously flown on the 1966 Gemini 10 mission, where he was a pilot. During that mission, Collins set a world altitude record before becoming the nation’s third spacewalker, completing two extravehicular activities (EVAs). His work on the Gemini 10 mission helped contribute to rendezvous and docking practices that would be used in the Apollo 11 flight, and missions beyond it. For being such an important astronaut in the missions leading up to the moon landing, as well as being a part of the mission itself, I thought it ironic that he is overlooked in favor of Armstrong and Aldrin. No matter! The point of this assignment was to tell a historical event from a person’s perspective, and I chose Michael Collins for his unique status and contributions to the moon landing. 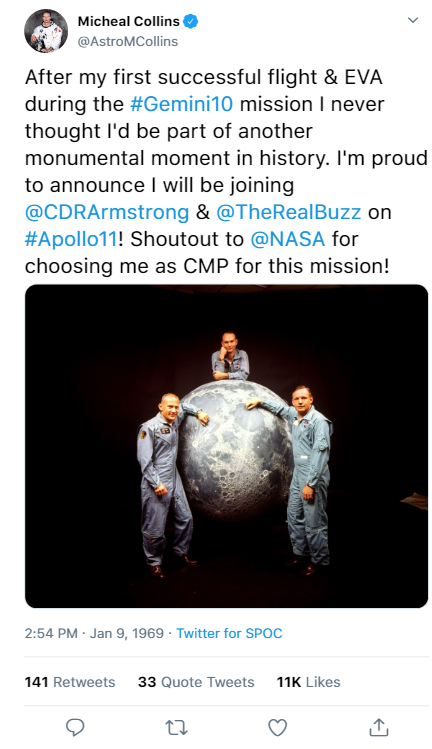 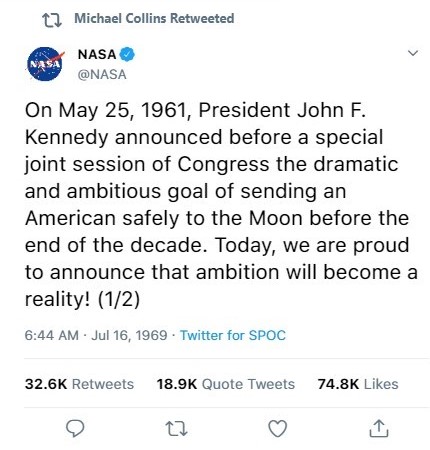 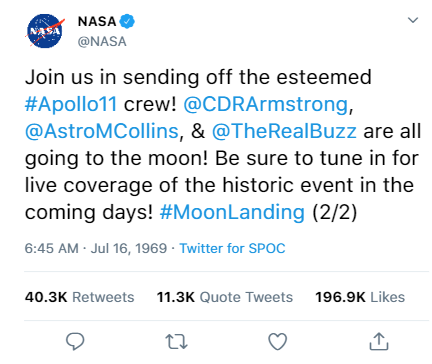 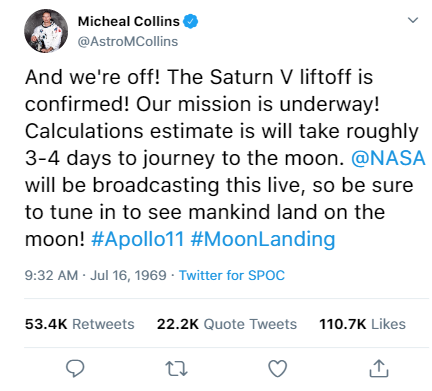 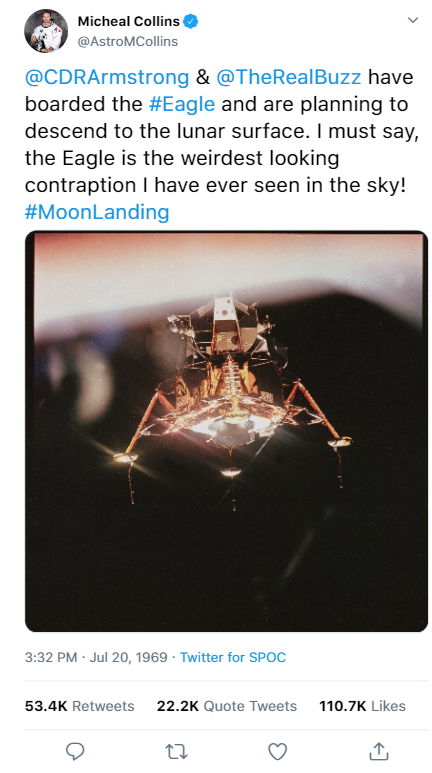 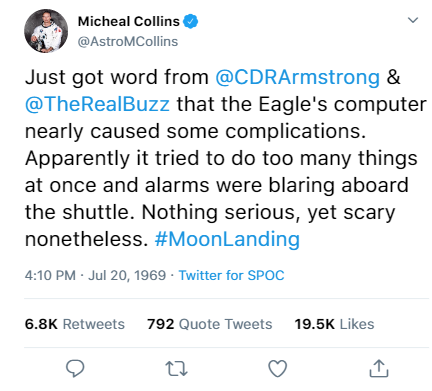 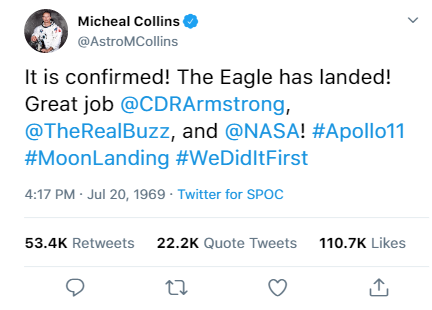 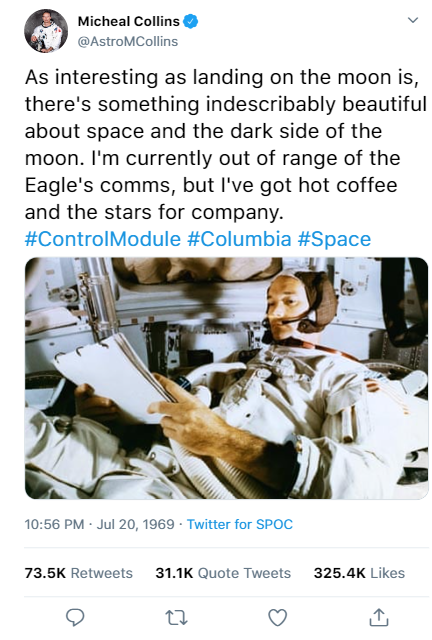 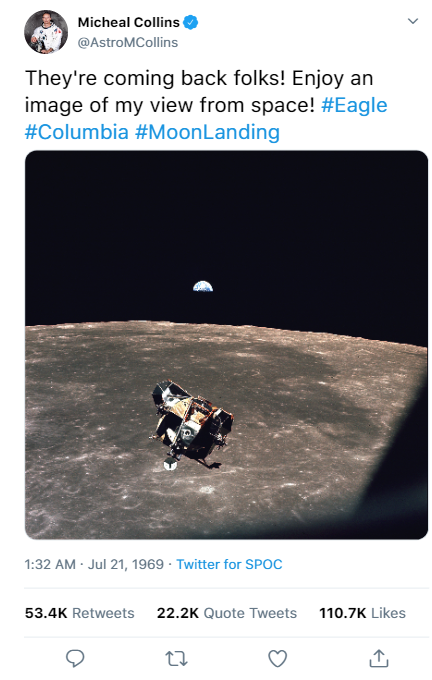 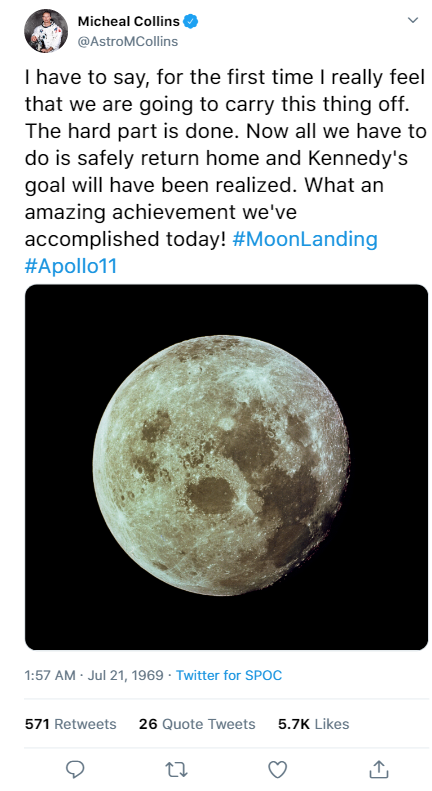 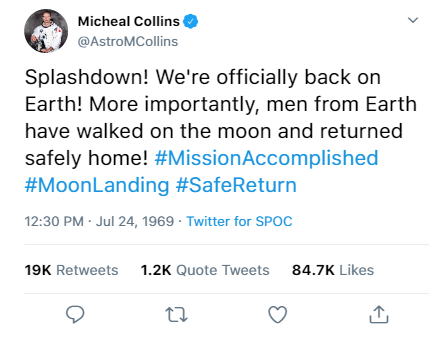 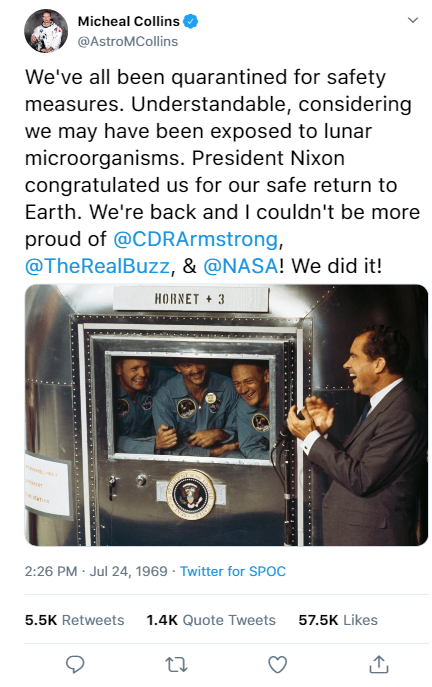 Something important I would like to point out is that I did not create a Twitter account to generate these Tweets. That would have been disrespectful, considering Michael Collins is very much alive and respected in NASA and Smithsonian circles. Instead I used a tool called TweetGen, which allows you to generate false Tweets for memes. The tool is very realistic, but also has limits. As it stands, you can only generate a base Tweet and are unable to create replies. You can edit them together to look like a thread, but it’s an irritating and tedious process. Another reason is because Michael Collins actually has a Twitter! Both him and Buzz Aldrin do! The Twitter handles I used for them here are their real ones, @AstroMCollins and @TheRealBuzz. Sadly, I could not find one related to Neil Armstrong, which is understandable considering he was very private about his life. Instead, I gave him the handle @CDRAsmstrong. CDR is actually an abbreviation of the rank Commander, which was Armstrong’s rank during the Apollo 11 mission.

Another thing I did was adhere to strict date and timestamps. I used NASA’s article “July 20, 1969: One Giant Leap For Mankind” as a guideline for many of the dates and times featured on the Tweets. For instance, January 9, 1969 was when the astronaut crew for the Apollo 11 mission was announced. July 16, 1969, precisely at 9:32 AM, is when Saturn V cleared the launchpad. July 20, 1969, at 4:17 PM is the timestamp when the lunar module landed; this is also when Armstrong announced, “Houston, Tranquility Base here. The Eagle has landed.” On that same day, at 10:57 PM, is when Armstrong descended from the lunar module and famously said, “That’s one small step for a man, one giant leap for mankind.” The issue with this is that Michael Collins never heard Armstrong say this. At that point in the mission, Collins was piloting the Columbia around the dark side of the moon and thus was cut off from all communications. I decided to include a Tweet at that precise timestamp to emphasize his place in this mission, and how he was disconnected from the others at that point in time. The final precise timestamp is the one on July 24, 1969, at 12:30 PM. This is the exact time the shuttle made the splashdown back on Earth, marking completion of the first lunar landing. One other cheeky thing I added to these Tweets is found in the Web Client information. Usually this will say Twitter for iPhone, Twitter for Android, etc. Mine says Twitter for SPOC. No, this is not a Star Trek reference. SPOC refers to the Shuttle Portable Onboard Computer, which is an actual abbreviation used at NASA. I thought it would be cool to include, since this was a space flight and simply because it’s an interesting little tidbit of information.

Overall, this assignment was a blast! I had a lot of fun looking through NASA’s database entries and looking through the image galleries from the moon landing. Pretty much all the information I used for this assignment came from NASA, though I did due some reading on Michael Collins to get a feel for him as a person as well as his voice. I’ll include a bibliographic list of sources I read through at the end of this post, for anyone interested. I think the most challenging part of this assignment was the text restrictions. TweetGen has a 280 character restriction, which means I had to reword a few times to include all my pertinent information while providing space for my hashtags. The minimum requirement was five Tweets, but Dr. McClurken mentioned ten was more reasonable to create a narrative. I believe I’ve done that and hopefully providing an interesting narrative from the perspective of an often overlooked astronaut who deserves more credit for his role in such a monumental moment in history!

Gohd, Chelsea. “Alone at the Moon: What Was Michael Collins Thinking during the Apollo 11 Lunar Landing?” Space. , July 20, 2019. https://www.space.com/michael-collins-remembers-apollo-11-moon-landing.html.